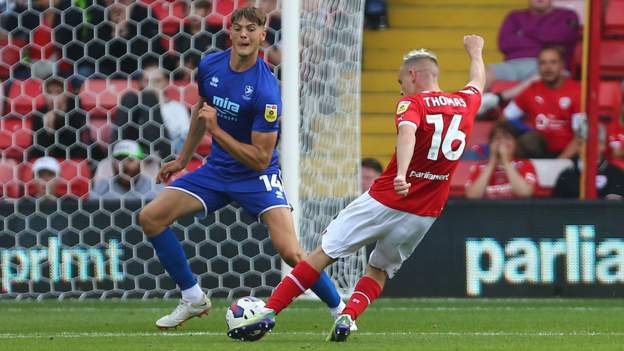 Luke Thomas scored the one objective when Barnsley beat Cheltenham in Oakwell, with new supervisor Michael Duff securing his first league win towards his former membership.

Wade Elliott’s facet had their first clear likelihood after a Taylor Perry cross discovered Dan N’Lundulu’s toes, who shot large from contained in the field.

Duff was pressured into an early substitution eight minutes from half-time when injured Nicky Cadden was changed by Luca Connell.

Barnsley put the ball at the back of the online 4 minutes after half-time when captain Mads Andersen hit dwelling, solely to see the objective dominated out for offside.

The winner got here within the 66th minute when Thomas went ahead after intercepting a free go from Cheltenham, hitting a ferocious blow on the left facet of the objective to beat Luke Southwood.

Kitching practically added a second objective within the final minute when his shot went simply over the crossbar.