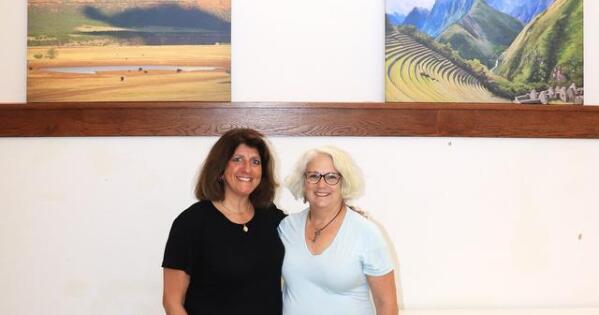 “Come Wander” is a becoming title for the present artwork exhibit on show on the Newtown Municipal Middle. Michele Hermsen’s large-scale pictures and Virginia Zimmermann’s large-scale work invite guests to wander via thematically organized photos that span the globe.

Based on a press release shared by the artists, “We’re taking the viewers on a journey of peace, tranquility and easy magnificence. We – all individuals – have been mentally shattered, however nonetheless, there isn’t any denying, some issues stay fixed and unchanged. For those who make your method, with an open thoughts, soul, you’ll discover that the world continues to be the identical lovely … place. Typically it’s a must to wander round to see it. Include us and we are going to take you there ”.

Zimmermann is a resident of Newtown. Hermsen lives in Fairfield. They each train at Fairfield Ludlowe Excessive College.

The 2 artists hung their works in the primary hall / gallery area of the Primrose Road constructing on June 6. The gathering is on show till the tip of July.

“We felt so contained, so closed by COVID, we needed to exit and have a good time the panorama, its magnificence and its majesty,” mentioned Zimmermann.

“We have now mentioned doing it on a small scale, however it’s not doable,” added Hermsen. “There’s simply an excessive amount of to take.”

“The concept is that these are nice landscapes. You are completely absorbed in it, “Zimmermann mentioned.

Hermsen agreed, saying, “You’re swallowed. It’s a must to sit nonetheless, simply to take all of it in.

Upon getting into the constructing from its southern entrance, guests will first encounter a picture of a backyard gate, then fences.

“We did it on function, to behave as a transition,” mentioned Hermsen.

“It is actually a dialogue, this give and take, forwards and backwards, between pictures and work from completely different locations,” mentioned Zimmermann.

The exhibition is sponsored by the Newtown Cultural Arts Fee. The fee showcase within the municipal heart additionally hosts a set of small works by Zimmermann this month. The works are all seen on weekdays from 8:00 to 17:00 and within the night when the constructing is open for metropolis council or committee conferences.

Editor-in-Chief Shannon Hicks will be reached at shannon@thebee.com.

Michele Hermsen, left, and Virginia Zimmermann stand with one among their works through the set up of “Come Wander”. Practically 30 large-scale artistic endeavors by the 2 artists are on show till the tip of July on the Newtown Municipal Middle. – Bee photograph, Hicks